The AzurSign module for Dolibarr adds a pdf printing template to the propals for electronically signing the generated pdf, thereby shortening the print / sign / scan cycle.

This model of pdf document is called "azursign", it is identical to the "azur" model, provided as standard by Dolibarr, except for the signature zone that is managed by the AzurSign module.

Works on PC (mobile or not), tablet and smartphone.

One of the possible usage scenarios is as follows:

- Your representative comes to one of your prospects with a commercial proposal.

- The proposal is entered in Dolibarr on Smartphone, Tablet or Laptop.

- If your prospect agrees, he can sign directly on the screen, thanks to AzurSign.

- The generated pdf is already signed, you can print it or send it by email.

0) After installing and activating the module:

1) Go to the configuration page of the standard module "Commercial Proposals".

2) Activate the "azursign" document template that has been added by the AzurSign module.

4) Choose "azursign" as pdf printing template and click on "Generate": 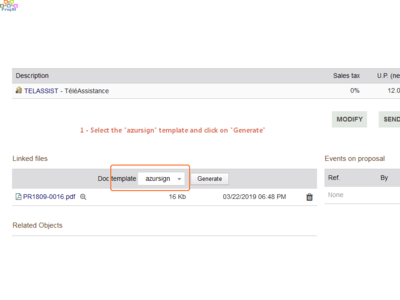 A dialogue appears to allow your prospect / customer to sign the commercial proposal directly on the screen: 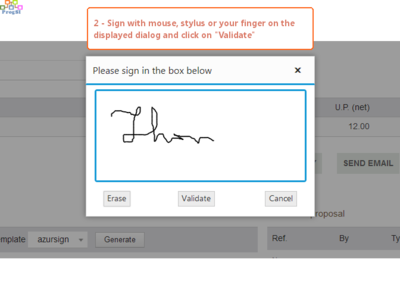 6) And that's it, the signature is integrated into the generated pdf: 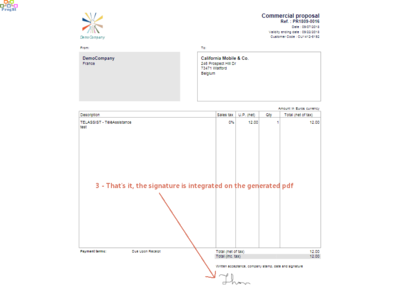 The proposal card must be in the "Validated" state to use this module.

If this is not the case, the "azursign" model behaves exactly like the standard "azur" model.