This is information on how you can get sources of Dolibarr project. Several methods are described, but we recommand using the one based on GitHub.

This method can be used by non technical users. It allows you to get sources of main development branch (called HEAD) by just downloading a file: This operation consist to get last version of Dolibarr files that are packaged each night into a tgz file. File is available with link:

New files overwrite old ones. The inconvenient of this method is that you must download and uncompress package each time you want to get updates.

Developers should not use this method to get sources but the next one.

Get last version of sources using a GIT anonymous access

You can use this method if you don't have any GIT access. With this method, you won't be able to submit any changes, so, if you are a developer, it is recommended to create a GitHub account and use the next method instead of this one.

First you must have a working install of Eclipse. EGit plugin must also have been installed. For this, use the Find And Install process into Eclipse menu, add the GIT update URL:

Then choose to install EGit (No need to choose JGit)

First, enter value of the repository with reference sources into your GIT client tool.

Your Eclipse GIT client will ask you to choose the branches you are interested in. Branches not selected now could be selected later by doing a "Fetch" from the "Remotes" view, but try to choose only the branch you need. This will save you time and problems later.

Note: if you are behind a firewall, you must set Eclipse proxy credentials into Eclipse menu Windows - Preferences - General - Network connection and use the alternative URL:

Note: if you are behind a firewall, you must set your porxy information and use the alternative https URL:

Once this step is validated, your GIT client will download all files from remote GIT server. This may last several seconds or minutes.

Once download is finished, you must choose which branch to us to work on.

This will create local branch and make checkout automatically.

Choose "Create Branch" (and check the box "Checkout"). This will duplicate content of branch to work on it locally and will refresh your "Working Directory" to work on this branch.

Then, you can setup Eclipse to avoid it to scan all project files for its build tools (Outline scanner, TODO scanner, syntax scanner...). This will avoid Eclipse to be too slow. For this, right click on project, choose Build Path and setup it like into following screenshot. 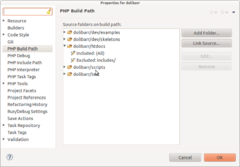 Get last version of sources using a GitHub user access

You must before create an account on GitHub (https://github.com/) and upload a public RSA or DSA certificate into your account profile.

Then, you must have a working install of Eclipse. EGit plugin must also have been installed. For this, use the Find And Install process into Eclipse menu, add the GIT update URL:

Then choose to install EGit.

You must before create an account on GitHub (https://github.com/) and upload a public RSA or DSA certificate into your account profile.

Then, you need to install GIT client (GIT command line tool with Linux installed with "sudo apt-get install git", or the GIT client for Windows found at https://git-scm.com/download/win).

Login to Github, with login you created in previous step. Then go onto page

This will create a copy (a fork) of project into your own github area. Because you will be the owner of this fork, you will have all permissions on it to be used in next steps.

Then process is same as getting sources with anonymous access.

URL to use for GIT clone is same:

Note that a HTTPS URL is also available but it's sometimes offline (so prefer using first one, link with HTTPS is required only if you are behind a firewall):

To update your local workspace:

If you made some changes into your Eclipse workspace on files that were changed into the GIT remote reference, your GIT client will make a merge automatically.

Commit and publish your changes

To see all changes you made into your working directory and waiting to be added into Git:

To add changes made into your local repository into the GIT index, then commit this index :

This will save add and changes into your local branch.

To push them on the GIT repository server,

To cancel a commit:

To merge changes done into your forked GIT instance into official Dolibarr instance:

Ask official project to include your changes

Once you pushed one or several commit toward your distant fork area on github, you can ask the Dolibarr core team to include it into official project. For this, follow this tutorial: https://help.github.com/articles/creating-a-pull-request/

Some developers may work and do commit into their own Git repository after forking the project. If you are interesting into getting this changes, you can import them with the following steps.

You need both Eclipse and GIT Command Line interface to achieve this:

Now, go on command line of your git repository (in most cases on Linux, it's /home/yourlogin/git/yourdolibarr) and type the git cherry-pick command:

where commitid is value of commit id you want to get.

Once this is done, go back to Eclipse and make a refresh on project. You will see modified files appears with decorators (with conflicts if there is).

If you prefer to forget completely all changes you made into all files (so to restore you workspace with content of remote repository), you can make a hard reset:

To reset changes you commited but not pushed to origin

To add a tag to a current version:

To remove a tag:

Create a clone (see previously) of the branch from where you want to create another branch, then go into directory and launch command:

Create a clone (see previously) of the branch from where you want to create another branch, with a checkout done. The go into view git. Choose branches, remote tracking and select start branch. Right click and choose "Create branch". Then make a push to create branch remotely. Then go into "Remotes - origins" and edit the entries to pull and push onto new branch. It may also be required to edit the .git/config file to have project linked by default onto new branch.

Do a push on branch but add : before name of branch:

Pushing a branch onto another Git server

You may want to synchronize another GIT server. To synchronize push to another server, this is how to proceed. With Eclipse:

To count number of changes developers have made between a version x and y:

To find id_end, choose among